These episodes are typically spoiler free. They may include listener comments, emails, a general year retrospective, and off-topic conversations. 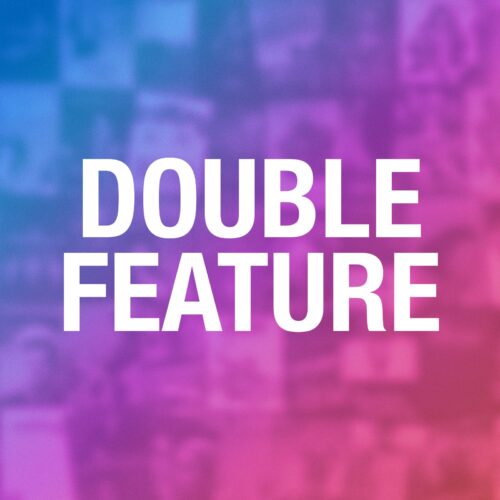 Go to Patreon.com/DoubleFeature for access to all previous episodes of Double Feature! A brand new run of the show resets next episode. For now, here’s a spoiler-free look back at the twelfth year of Double Feature. Each year of Double Feature is a self-contained podcast. The show looks at two movies every week and tries to find what’s notable about them. Throughout the year, additional themes and motifs are considered. At the end of the year, the finale episode (this one!) takes a look back at the best and worst of the year. Movements are scrutinized, conclusions are reached, and threads are closed before a new year of the show takes a fresh start. END_OF_DOCUMENT_TOKEN_TO_BE_REPLACED

SPOILER FREE SHOW! The reality of 2017 catches up with the bunker and it goes…not well. An extra long look back at the 2016-2017 year of Double Feature. Episode provides a snapshot of the time and also what’s changed in society since the episodes have aired. Additional Content runs full force! The extracurricular accomplishments of Double Feature outside the main run of shows. Bringing listeners and members further behind the scenes. The one film franchise Michael still ins’t getting. A new use of the machine for empathy. The pairs that were fucked and the pairs that were the opposite of that. Also, really really really great movies. These unpredicted results of this year’s Double Feature marathon / journey / whatever. END_OF_DOCUMENT_TOKEN_TO_BE_REPLACED

SPOILER FREE SHOW! Double Feature faces themes as real-world issues collide with fiction. Fuck count-downs. An episode with Little to no plot details. An episode not requiring having seen any Year 8 movies. As requested – a completely uncut live episode! How people get information in 2016. Everyone has a bubble. Reinforcing beliefs. The political result of the LA/Austin schism. 2016 US presidential politics. Racism is alive in we’ll in America. Michael has decided to embrace the Oscars. Eric learns the alternate title for “The Oscars.” END_OF_DOCUMENT_TOKEN_TO_BE_REPLACED 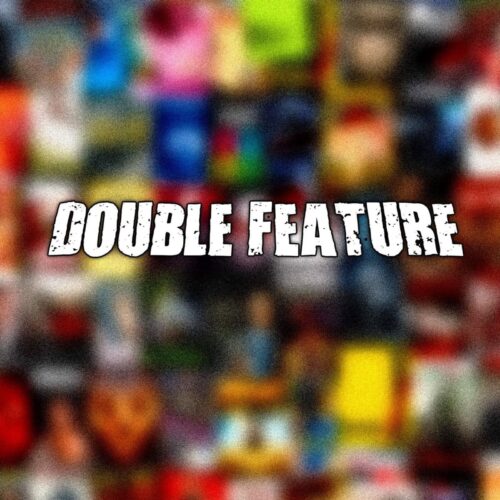 SPOILER FREE SHOW! The Year Seven retrospective. A new, chapter-less world. A more fluid, conversational year end format. Listener feedback, brought to you by tweets. What was the secret subtext 2014 and 2015 brought to Double Feature? Police and the black community by way of Spike Lee and Woody Allen. Feminism, the redefinition or rape, Repulsion and Compliance. Post-episode shockers. The best double features, supposedly. Films to revisit. The additional content reigns supreme. All the information you ever wanted about Double Feature: The Movie. Meeting people in Austin Texas. END_OF_DOCUMENT_TOKEN_TO_BE_REPLACED 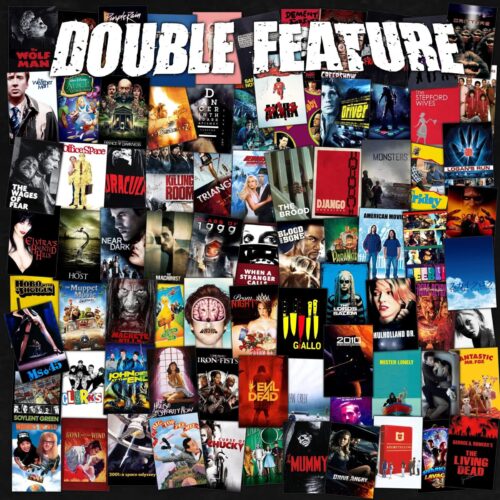 SPOILER FREE SHOW! The Year Six retrospective. A look back at the last 52 double feature pairs. Taking a break from Filmspotting jokes to make love to Battleship Pretension. Revising the official position on movie reviews. A tangent on the insightful career of Roger Ebert. Double Feature made a short film (without the help of Russ Meyer). The challenges of making a six chapter short film for Kickstarter. More regarding Eric’s involvement in Director’s Cut. Hannah Carter’s prop magic. The growing genre of films designed by the Internet. A defense for the most unexpected film-of-the-year choice. A conversation around this year’s Additional Content. END_OF_DOCUMENT_TOKEN_TO_BE_REPLACED 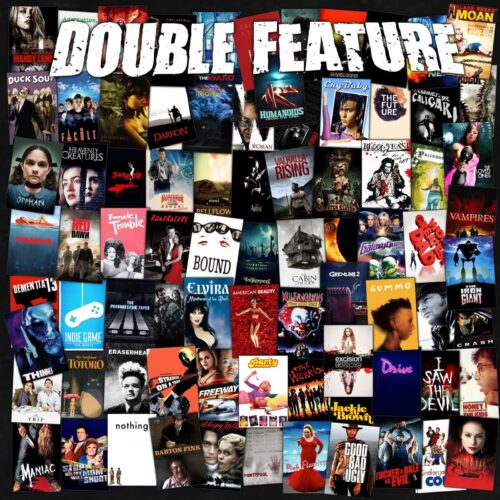 SPOILER FREE SHOW! The Year Five retrospective. Trent Reznor and Nine Inch Nails return with Came Back Haunted. Double Feature discontinues the mp3 feed, but will anyone seriously give a fuck? Making this show possible again. Pairs that were great, even if you don’t remember them. A followup on the Double Feature Kickstarter. Fears, coming to terms, and a lack of contingency plans. Enter the future! Completely fucking up the simple pairing of two films. A recent mistake. The very first 3D film. Lost films. Some answers regarding Ronda Bryne, Sean Bryne, The Secret and The Loved Ones. You didn’t see that coming. Eraserhead and other successes. Several invocations of David Lynch without a single additional mention of the Came Back Haunted video. Michael Koester does a great job. Emails: read some. The best films of all time of any film ever in so long as those films were on the show in the last 365 days. Eric forgets what his favorite movie of the year was. The Lexicon finally exists (and, although not talked about, you’ll notice Year 1 has vanished). END_OF_DOCUMENT_TOKEN_TO_BE_REPLACED 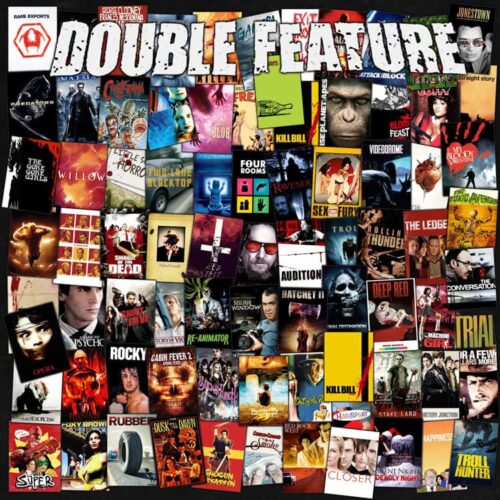 SPOILER FREE SHOW! The Year Four retrospective. An actual conversation about Filmspotting. All that could have been. Eric is on IMDB.com! The study on spoilers. Spoiler extermism. The Louis spoiler tiers. More on japanese pornography. A discussion on chapters. Fucking up on The Little Shop of Horrors. Behind the scenes getting Freaks on the show. The best pairs on year 4 of Double Feature. The worst pairs. A look back at Coffy + Foxy Brown. Feminism and female empowerment. The urgent red square. Don’t tape off your FaceTime camera, that was a joke. Christopher fixes Troll Hunter. A series of paraphrased emails. Times we were completely wrong. Clarification on what Double Feature doesn’t know. Unstated knowns about Double Feature. Michael using Happiness as a prank. Eric explains his time in psychosis. Potential movies for Year 5. Covering more foreign films. Talking about music. DRC Music, EL-P’s Cancer4Cure. Glittermouse. Evil lesser than two evils biohazard team. The best films anyone saw all year. A story about street art. Banana guy. The aftermath of Rocky + Asia. Checking back in on the Free State Project. The Trick ‘r Treat shorts. TV Shows. The Lexicon and Year 1 vanishing. END_OF_DOCUMENT_TOKEN_TO_BE_REPLACED 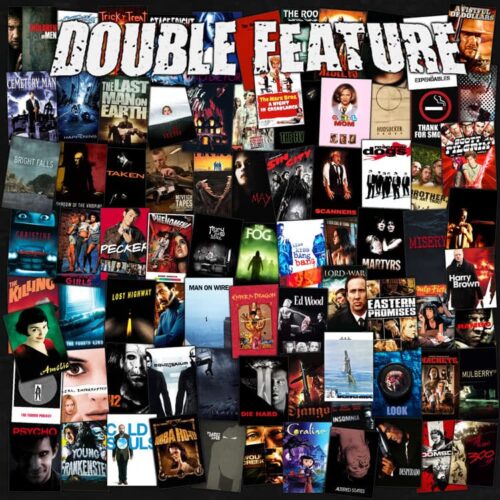 SPOILER FREE SHOW! The Year Three retrospective. Listener emails. Favorite pairings. Worst pairings. Things Double Feature was wrong about. Surprises. Nude listeners. Microsoft ends the Zune. Bag cat. Tremors and Family Ties! Accessibility. Double Feature and the topic of religion. Why talk positively about all films? Eric does not own a cell phone. A spoiler free conversation about the last 15 minutes of High Tension. Double Feature Show Ripoff and Film Shack. Double Feature’s RSS feed and the mp3 version of the show. The future of the old shows. Revisiting the first date rings. Sky friend or sky pig? Why nudity is the most insane taboo. END_OF_DOCUMENT_TOKEN_TO_BE_REPLACED 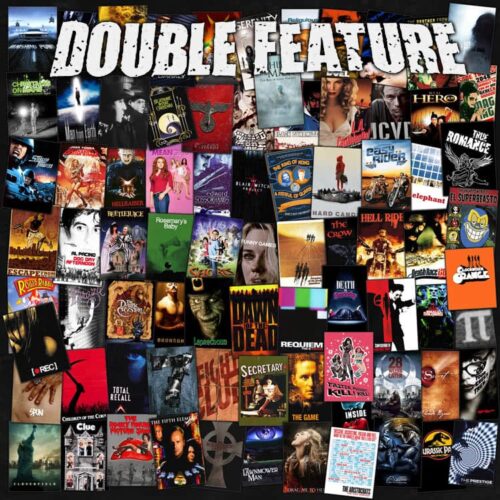 SPOILER FREE SHOW! The Year Two retrospective. Two fucking years of weekly Double Features. David Stieve has a Behind the Mask prize for you. Facebook chat. Where did all the interviews go? Honorarium. Vulgarity. Other people love The Spirit. More information on Dark City and Sway. How Double Feature is recorded. The Future of the Killapalooza. Eric still thinks the MC of the Music Box Massacre is a Jackass. The purpose of Double Feature. We hate James Cameron and LOVE Joss Whedon! The future of David Lynch on the show. Skeptics, atheists and…sometimes libertarians. Where do you get movies from? Pot and UFOs. Michael’s take on The Human Centipede. A Blair Witch theatre experience. Seriously, that Music Box Theatre host is a jackass. Drugs and birth defects. Repo vs The Rocky Horror Picture Show. A top countdown list from people who hate top countdown lists. END_OF_DOCUMENT_TOKEN_TO_BE_REPLACED 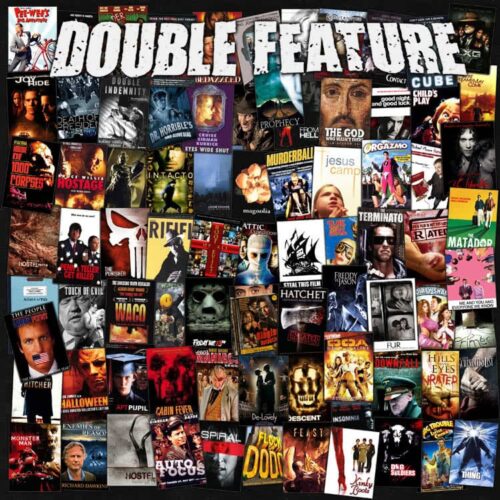 SPOILER FREE SHOW! The Year One retrospective. What is a spoiler? A whole year of weekly Double Features. How the show has changed. Random Emails! What makes for a good Double Feature pairing. Another defense of House of 1000 Corpses. A look back at the Waco show. SAND BEETLE! The Best Pairings. The Worst Pairings. The inherent flaw in the previous format of Double Feature. Highway survival Horror. Double Feature’s producer. And the biggest fuck up of the entire show is…? The future of The Prophecy. Feast sequels. Weighing in on the Friday the 13th remake. Becoming exploitation. The Mel Gibson opinion. Stuff that had to go on the show (but shouldn’t have). Michael admits mistakes. The problem with featuring more exploitation on the show. Michael admits more mistakes. Taking back Dr. Horrible. Times Eric and Michael were clearly wrong. Films that aren’t remember as fondly. Which bad actress from Eric’s films annoyed Michael the most? Behind the scenes of Double Feature interviews. Listener homework payoff: A good vs evil epic and a film with a legitimately satisfying Scooby-Doo ending. Paris of Uncle Gamer & Remember When. More listener feedback. Opinion time: Japanese Horror? Eric knows New Zealand isn’t in the UK. A through breakdown of the J-Horror aesthetic. The best films from the first year of Double Feature. Eric’s comfort food films. Next year’s format: Two films that go together! A small “correction” regarding 12 Monkeys. Lost. Double Feature loves Kate. END_OF_DOCUMENT_TOKEN_TO_BE_REPLACED